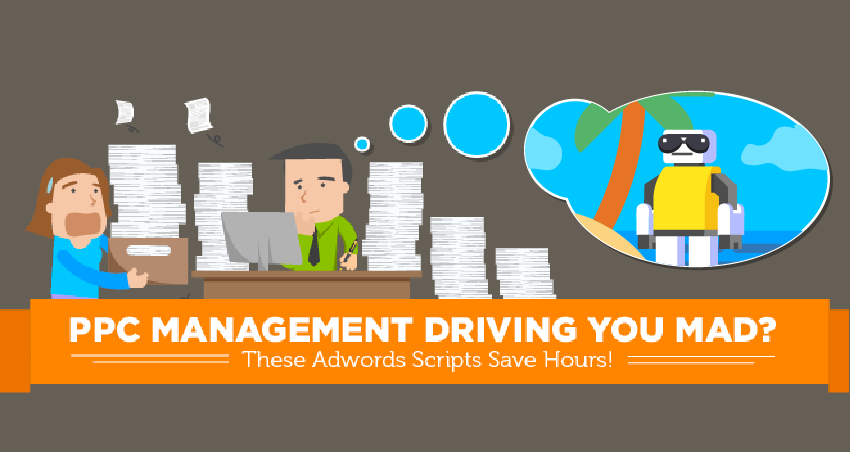 PPC Management Driving You Mad? These Adwords Scripts Save Hours!

What Are AdWords Scripts?

AdWords scripts are an extremely powerful tool in Google AdWords. They have the capability to do most of, if not everything, a PPC a manager can do and it does these tasks almost instantly. They can gather specific data from the largest of accounts in seconds, restructure an entire account with its campaigns, ad groups, and keywords in an instant, and allow you manage an entire account from a Google Spreadsheet. Now you do not need to be a coding master to use AdWords scripts (although having a working knowledge of Javascript absolutely helps) because, thankfully, there are PPC managers who are sharing their scripts online (we’re one of them!) and Google has a tutorial on using scripts with a few examples. So the most you’ll have to do is a simple copy and paste and on occasion change a few variables and structure some spreadsheets. But if you would like to write your own AdWords scripts, then knowing Javascript is a must.

How to Implement an AdWords Script

Before we start giving you some examples of Adwords Scripts, let’s first learn where and how to implement them. There are two different types of AdWords Scripts: MCC or MCCapp scripts, and account level scripts. They both use Javascripts and follow the same syntax, the only difference is that MCC scripts are implemented in the “My Client Center” page in AdWords and they are capable of working on multiple accounts at once. Account-level scripts, which are what the majority of scripts are going to be, only apply to one account.

Here’s how to implement MCC scripts:

at the top of the page, here:

On the left hand sidebar you will see. Here is where  you will see all of the scripts that have been added to the Client Center. Once you add/create a script, you can set up a schedule for your script to run. That way you won’t need to go back into your script library and hit

to implement a script every time you need it run. This is especially useful when you have reporting scripts, or budget management scripts that should be running perpetually. Also, after the list of all your scripts, you will see Logs.

This is a working history of your script runs. Here you will see when a script was run, its name and whether it made any changes or wrote anything to the logs.

at the top of the page here:

This is where your script will inputted. The window is also a working IDE (Integrated Development Environment), so if you are going to be writing your own script, you can do so right here. But most of us will just be copying and pasting the code into the window. Here is where you’ll name the script, save it, and preview it. Previewing your script means that Google will run your script and show you all the changes and logs it would make to your account if it were actually run, but it won’t actually make any of those changes.

This tool is invaluable when it comes to debugging and making sure that you have the right script for the job you want to perform. To preview, just hit

once your script is implemented in the window. Google requires you to authorize every script before you run or preview it. Just hit

to have your script actually run.  Your new script will now be in your script library and you can run it whenever you want or schedule it.

Implementing a script at the account level follows the exact same rules. The only difference is that the script libraries are stored in a different location.

When logging into your AdWords account, select which account you want to apply the script to here.

Once you are looking at your account, hit Bulk Operations in the sidebar on the left. Bulk operations are tools used to automate your account by making multiple changes across the account. Obviously, we’re working with scripts so we are going to select Here you’ll be taken to the script library which operates exactly like the one at the MCC level. Now that you know where to implement scripts, let’s get to what you’ve been waiting for- some powerful scripts that you can start using today.

*Google’s IDE provides the best platform for editing your code, so copy and paste the code into their before following commented instructions within the code or updating variables.*

Now that you understand what Adwords scripts and how to implement, let’s get to the fun part…what scripts can you use to help improve your adwords account management?

Make sure to always preview your scripts before running them. Also, getting yourself familiar with javascript and Google’s API will only serve you well as you manage scripts. Taking the time to read scripts thoroughly to learn what the lines of code are doing will enable you to debug, appropriately update code, and perhaps write your own script or modify one of these. Scripts are one of the most powerful resources there is in AdWords, it is also one of the most underutilized due to people shying away from the Javascript code and prematurely labeling it as complex.

Maximizing the Potential for AdWords Scripts

We’ve given you examples of some scripts that you can quickly/easily plug in to your campaign.  Now let’s take this a step further.  What if you start combining the features and functionalities of different scripts into one?  And this script writes into one spreadsheet with multiple worksheets, synced with your account?  What if, instead of having to scan your account for low performing keywords, high converting keywords, duplicate keywords, etc…they all show up on a spreadsheet, where you can review, approve, make the changes, and they automatically update your adwords account?

This is exactly what you can do with Adwords Scripts, when you take them a step further.  In the example below you’ll find the specs to an adwords script that will allow search for different parameters and output them all on a spreadsheet, to be used when making decisions about the campaign: As you can see, there’s no code, no complex function calls and variables. It’s a description of what some script we wish we had would operate. You don’t even need to think in the context of scripts. That’s the interesting thing about using AdWords scripts, you start development at the end.

Once you have clearly defined guidelines about what YOU need to maximize your account, you can conceptualize this and then simply find a programmer with experience in Javascript to write the script for you.  It is no cliche when we say that the only limit to AdWords scripts is your imagination, and determination.

Scripts can even connect to third party sites and external devices. Allowing you to create ads and keywords via text message or take real time data from weather sites or Facebook and inserting it directly into your ads.

Adwords Scripts should be essential to any Adwords manager’s arsenal.  If you aren’t yet using them, head to our Adwords Scripts directory right now and start experimenting!